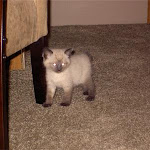 Thanksgiving day I was off… and woke up to find my cat in the middle of the floor listless… he had vomited yellow foam and I knew that was not a good thing.  I scooped him up and his head just flopped over, he did not have the strength to look up.

I was heart broken and called mom… who I had to beg at first to come and take us to the Emergency vet.  I called around to find the cheapest appointment and off we went to Metropolitan Vetrinary Specialists and Emergency Care, on the other side of town of course.  It was a long, cold drive out there and we met a wonderful doctor named Dr. Allgeir who said that Elvis had a chance, but we would have to really work at it to save him.  Mom tried to get me to consider putting him down, but after raising the little critter with a bottle and he is only a little over 3 years old I just did not have the heart too.  I had to try, I couldn’t just put him down.

In order to cure hepatic lipidosis, you have to force feed the kitty every 3-4 hours.  So the feedings began promptly that night.  Thanksgiving was miserable for mom and me, the first few days he did not put up any resistance to the feeding.  Now that he is 9 days into it… he is much stronger and it is becoming more difficult to feed him.

Elvis had a terrible yellow color around his ears, his eyes and gums… that has started to clear up.  He’s far from out of the woods… we may have to feed him like this for another two weeks or so until we can get him to eat again, but he is showing lots of improvement.  Everyone keep their fingers crossed.

This site uses Akismet to reduce spam. Learn how your comment data is processed.